In the year of 2015, we will continue our activities by nominating “Japanese Citizens” as a candidate for the Nobel Peace Award.

Reason 2:  The Japanese people are to act as sovereigns and consider it own issue.
By nominating Japanese Citizens as the candidate for the Nobel Peace Prize, each individual, as a sovereign and a person concerned, can consider Article 9 as his own, and learn and discuss the issue  more seriously.
Moreover we sincerely hope that each individual will step forward to make the aspirations of Article 9 come true.

Reason 3: We do not want to narrow down the candidates to a specific group or individual.
We know there were many people during WWII and after the War who passed down the misery of the war and importance of peace. We hope that these efforts will be brought to light more clearly.
We also know many individuals and groups have been working diligently  in order to protect Article 9.
Therefore we have decided that we should not narrow down the candidates to specific people and groups.

Reason 6:  “Japanese Citizens” are registered as a genuine candidate for Nobel Peace Prize.
In April 2014, our implementation committee received the official letter from the Nobel Committee.
This letter is sent only when the Committee considers the recommendation is acceptable to them.
Thus the Japanese Citizens has been accepted as a group, and made it a genuine candidate of the Peace Prize.
Also in September of last year, we received an invitation letter from the Norwegian Nobel Committee requesting us to nominate  candidates for Nobel Peace Prize for 2015. 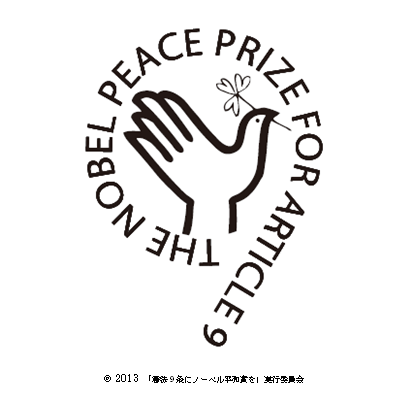